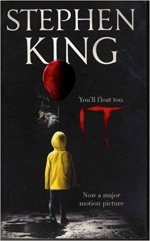 Goodreads synopsis:‘They float…and when you’re down here with me, you’ll float, too.’

To the children, the town was their whole world. To the adults, knowing better, Derry Maine was just their home town: familiar, well-ordered for the most part. A good place to live.

It was the children who saw – and felt – what made Derry so horribly different. In the storm drains, in the sewers, IT lurked, taking on the shape of every nightmare, each one’s deepest dread. Sometimes IT reached up, seizing, tearing, killing . . .

The adults, knowing better, knew nothing.

Time passed and the children grew up, moved away. The horror of IT was deep-buried, wrapped in forgetfulness. Until they were called back, once more to confront IT as IT stirred and coiled in the sullen depths of their memories, reaching up again to make their past nightmares a terrible present reality.

My thoughts:
It is a lot of talk about “IT” right now and it´s all because of the movie who had premier earlier this month. Me my self have not seen the new movie yet but I saw the old one when I was a kid. I thought that I should read the book this time since I don´t remember that much from the movie. So I did. I did not only read it. I also listened on the book so I could follow the story even when at work or doing boring house chores. Perfect solution. 🙂

It is a really good book. It is a good story, great characters and a exciting plot. Can not say that it is scary in any way though. But i´m not that kind of person who gets scared by books. I like that you feel like you are really there in the story. You can feel the heat of the summer sun in 1958. You can feel the panic and your own feet against the ground as they are being chased. You are just there. But you can also really clearly see that this is a Stephen King book. Because everything takes just to long. It is a little to much in the end and one thing just don’t make sense to me. And that’s to bad really.

I felt a few times through out the book that it was going to slow and I wanted them to “just get on with it”. Around page 500-600 it was dead calm. The calm before the storm, you could say, but it was a boring calm. If I didn’t have the pressure to get done with the book so I could see the movie, it would have been easy for me to lay down the book at that point. That’s the problem with me and Kings book. They are great, then they are like on hold, in a grey area that´s just pissing me off and makes the story stop. If I don’t get myself over those 100+ pages, I will probably never pick up the book again.

But I ended it and i´m happy for it. I would totally recommend this book to who ever likes to read big books. I don’t think you have to bee an horror fanatic och fantasy reader or anything like that to read this book. It is really for everyone, I believe. Just have an open mind. 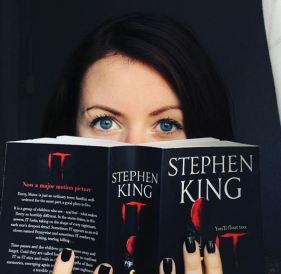