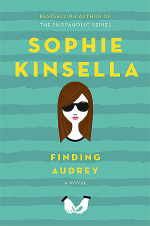 Goodreads synopsis: Audrey can’t leave the house. she can’t even take off her dark glasses inside the house.

Then her brother’s friend Linus stumbles into her life. With his friendly, orange-slice smile and his funny notes, he starts to entice Audrey out again – well, Starbucks is a start. And with Linus at her side, Audrey feels like she can do the things she’d thought were too scary. Suddenly, finding her way back to the real world seems achievable.

My thoughts: It was…. okay, it was cute and sweet. A little funny, a lot heartwarming and a quick read. Something nice to occupy my mind with after the mind blowing good horror/thriller and mind blowing bad chick lit book I recently read.  It takes on a serious topic and also gives the reader a true and honest look into a young girls life while living with depression and anxiety. When I was a teenager, I had a lot of trouble with the same. I truly understands how it is and how bad it can be and how hard it can effect a family. But I also understands and knows that it isn’t the end of the world, you can get better, at least I did and life is worth fighting for. Kinsella did a great job with describing the feelings and actions in Audrey’s life. The one thing that bugged me the most was the whole Linus relationship. But that I can’t go into in detail without spoiling the story, so we will leave it at that.

The book is about Audrey who have a really ruff time and suffers from some severe anxiety. She is a young teenager who lives with her “crazy” family somewhere in England (can’t remember where). She has no friends, do not go to school and goes to therapy once a week.  What I love the most about the book is the family. They are loud and obnoxious but still a family who loves and would die for each other. I love the mother and her “old” ways of handling the family and the father who reminds me so much of Arthur Weasley (from Harry Potter series). I could really picture him in my mind. I love young Felix and his ways of playing messenger between Audrey and Linus oh and Frank. Come on, you got to love Frank. He is like the typical, modern teenager and so lovable. They all have their own character, traits and quirks and Kinsella has as always done a great job with describing her characters and I find no fault here.

I did like the book but didn’t love it. I find this whole “teenage love angst” a little too much over the top and I think i’m starting to get to old for that. And I also find the book a little too short and would have love to have some real confrontation or emotions not only from Audrey but other characters to. It is a hard topic to write about and I do think Kinsella tried to steer away so it wouldn’t be sad and depressing. But too much happy, happy, fluffy stuff, just makes it unrealistic. But maybe that is just me since I have personal experience and to this day still struggles with anxiety.

So over all a good story, quick and easy. But don’t go and expect to get to know what happened to Audrey, because that mystery is never revealed. You get hints and can pretty much build your own story from it, but it bugs me that I never got to know what “really” happened.