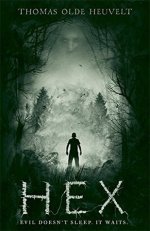 Goodreads synopsis: Whoever is born here, is doomed to stay ’til death. Whoever settles, never leaves.

Welcome to Black Spring, the seemingly picturesque Hudson Valley town haunted by the Black Rock Witch, a 17th century woman whose eyes and mouth are sewn shut. Muzzled, she walks the streets and enters your homes at will. She stands next to your bed for nights on end. Everybody knows that her eyes may never be opened.

The elders of Black Spring have virtually quarantined the town by using high-tech surveillance to prevent their curse from spreading. Frustrated with being kept in lockdown, the town’s teenagers decide to break their strict regulations and go viral with the haunting, but in so doing send the town spiraling into the dark, medieval practices of the past.

My thoughts: Two nights in a row I have been dreaming about the wicked Witch of Black Spring. She have sneaked her way into the back of my mind and taken control in a way I have never experienced before. I’m not easily scared and specially not by books. And certainly not in a way where I actually wakes up, in the middle of the night with a racing hart and with a feeling that I don’t want to sleep anymore. I can feel discomfort and such but never really fear.  I wouldn’t call this one a scary horror either but it’s still an unpleasant book in the way that it was uncomfortable and mesmerizing at the same time.

Well written with an really interesting and suitable history and backstory. The details fit together nicely and in a way that it did not feel exaggerated or cheap. The original story takes place in a Dutch town but when the rights for the English version was sold it was decided to move the settings to a Hudson Valley and change the ending. That is two major difference between the original story compared to the translated one. According some forum threads I found, there is no big difference and has no great significance. Since I’m never gonna read the dutch version, it really doesn’t matter to me.

There is a lot of mixed feelings toward this book out there and my own are probably more on the good side than the average. I found the book complex and deeper than I first thought. A little obsessive with tits, breast and nipples but hey it is a guy who have written it after all. I liked the ending (even though I hate it) and I like how it makes you think. It compels you to seek deeper and read between the lines. A book which awakens feelings and questions and do need to be discussed because it is all in the way it is interpreted.