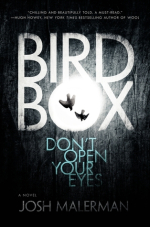 Goodreads synopsis: Something is out there, something terrifying that must not be seen. One glimpse of it, and a person is driven to deadly violence. No one knows what it is or where it came from.

Five years after it began, a handful of scattered survivors remains, including Malorie and her two young children. Living in an abandoned house near the river, she has dreamed of fleeing to a place where they might be safe. Now that the boy and girl are four, it’s time to go, but the journey ahead will be terrifying: twenty miles downriver in a rowboat–blindfolded–with nothing to rely on but her wits and the children’s trained ears. One wrong choice and they will die. Something is following them all the while, but is it man, animal, or monster?

My thoughts: I had such a bad luck with this book. Me and a friend started a BookClub since we could not find one here where we live. The first book we choosed to read was Bird Box. It was supposed to be Novembers book. But I could not get hold of a copy in a bookstore. So I ordered one online and the order was cancelled due to empty stock. I ordered from another web store, same thing there. Note that by this time, two weeks had already passed. I tried to order it to a bookstore in town, but the system was down. In a last attempt I ordered a different format from the first place I ordered from. After a couple of days I received note that the book had been shipped. Hallelujah. I may still have time to read it since this was around 15 of November. However due to Christmas, it took longer than usual for the book to arrive. I actually started to think that it had gotten lost in shipping. But on the 3 of December it finally arrived. 18 days after I ordered it, a month after I ordered the first time. But I still had time to read it. Our club meeting is on Thursday 6 of December. It gave me three days. Would I make it?

Well I did And i’m so happy that I finally received the book. It was so much better than I had predicted. Malerman did a great job writing a book, solely relaying on sensory other than image description. Sound and feel descriptions, emotion and imagination build most of the book. It creates a really spooky feeling while reading. It reminds you how vulnerable we would be without our eyes and it certainly reminds you of all your childhood fears. Remember those? The terror you as a child felt for not what you could see, but what you could not see. The monster under the bed, the beast in the closet. The creatures outside your window, just waiting to eat all the small children, not laying in bed at night. It is an emotional read where even you as an adult do feel discomfort to some degree. And I loved it.

Unfortunately I did have some problem with the writing. Malerman keep referring them by names ALL THE TIME. I’m not kidding that Malories name was mentioned on the same page at least fifteen times. If he had used words like “her”, “she”, “him”, “that”, “it” and so on, would have eased up the flow of the text considerably. After fifty pages you don’t think about it anymore, but it bugged the hell out of me in the beginning and when a book only is 250 pages, you do not want to be bugged one quarter of it. And I have thoughts about the end. I will however not discuss it here due to spoilers. But either way, the book is certainly worth reading and I’m happy that I finally got to.