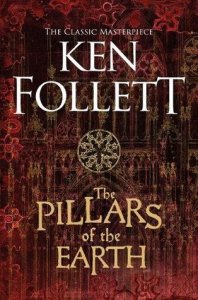 Goodreads synopsis: Everything readers expect from Follett is here: intrigue, fast-paced action, and passionate romance. But what makes The Pillars of the Earth extraordinary is the time the twelfth century; the place feudal England; and the subject the building of a glorious cathedral. Follett has re-created the crude, flamboyant England of the Middle Ages in every detail. The vast forests, the walled towns, the castles, and the monasteries become a familiar landscape. Against this richly imagined and intricately interwoven backdrop, filled with the ravages of war and the rhythms of daily life, the master storyteller draws the reader irresistibly into the intertwined lives of his characters into their dreams, their labors, and their loves: Tom, the master builder; Aliena, the ravishingly beautiful noblewoman; Philip, the prior of Kingsbridge; Jack, the artist in stone; and Ellen, the woman of the forest who casts a terrifying curse. From humble stonemason to imperious monarch, each character is brought vividly to life.

The building of the cathedral, with the almost eerie artistry of the unschooled stonemasons, is the center of the drama. Around the site of the construction, Follett weaves a story of betrayal, revenge, and love, which begins with the public hanging of an innocent man and ends with the humiliation of a king.

Okay, breathe! It’s difficult for me to describe why I love this book as much as I do. It’s a 1104 pages long story about the building of a cathedral in the 12-century and you would think I’m on drugs, but it was so damn fascinating. The characters are memorable in both good and bad ways, the story was interesting and the plot was captivating. It has been a while since I was so emotionally invested in a book. The pillars of the earth is pure and simple one of the best books I have read in 2019.

First off, a warning. If you are a sensitive soul or in any other way have problems with rape and injustice, DO NOT READ THIS BOOK! Bear in mind that this book takes place in Medieval England where the church has a strong hold on the people, the rich rule the poor and there is violence, misogyny, accusations of witchcraft, revenges back and forth and rape. Yes, rape! And one scene is especially disturbing and graphic. It was hard to read and I was totally unprepared for it.

Other than that, it is a wonderfully written book with characters you love, hate and love to hate. It is a page turner and it was like I could not get enough. I still can’t get enough and I want more. The main plot is about the building of a cathedral but it is the characters around it who really drove the story forward. There was some love stories in there, friend and family relations took a huge part and there was a few, strong female characters who I wish to praise Follett for doing such a good job with.

As strange as it sounds, I loved to read this book. Even with all the injustice, despair and misery, there was always hope. And all the weaving of destiny was really what made it all come together in the end in a satisfying way.

2 thoughts on “The pillars of the earth – Ken Follett”