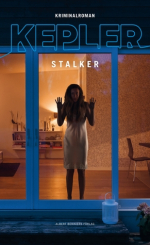 Goodreads synopsis: The police receive a video clip of a woman in a window and reason that someone must have been standing in the garden just outside her house to be able to film her. The next day the woman is found dead in her home, the vicious violence of the scene shocks even the most seasoned investigators. A few days later, another clip is sent anonymously to the police, but there’s no way of identifying the woman before she too falls victim to a brutal attack. When he finds her, the woman’s husband is so traumatized by the violent scene that, in a state of panic, he starts cleaning the house. He even washes the blood from his wife’s body and puts her to bed, as if nothing is the matter. He may have seen a vital clue but is in such an extreme state of shock, and seems to be suffering from short-term memory loss that the police cannot usefully question him. Criminal psychiatrist and hypnotist Erik Maria Bark is called in hypnotize the man in order to unlock his memories of the murder scene. But what Dr Bark uncovers in his sessions with the dead woman’s husband make him decide to lie to the police.

It becomes clear that the case cannot be solved without the help of Detective Joona Linna, the man who’s been missing for more than a year and has been presumed dead.

My thoughts: Lars Kepler, the married duo who writes under that name, has done it again. With Stalker we yet again meet Joona Linna and all the loose threads from the earlier books are finally tied together. Even though the series is about Joona Linna, he has a lot smaller part in this book than usual. Here it is Erik Maria Bark who stands in the headlight and the character you get to follow the most. He is awesome and I have always liked him so it was great to get to know him even more.

I really like the stalker plot where as a woman, it even was a little frighting for me and with its graphic content, gave me the chills.  I found it somewhat of a paranoid thriller and I’m happy that I don’t live on the first floor (even though I curse those stairs everyday). And I Still checked my windows and doors a little extra, just in case. Not that I’m in any danger of being stalked, but it just felt better you know. Funny how books can have such  big impact on the everyday life. Anyway, I liked the plot and it is well written as always. I wouldn’t say that Stalker is my favorite in the series but it isn’t the worst either.

There is a lot of plot twists and one was really surprising and I did not see that coming. I should have and I kick myself for not doing that and it is great work by Kepler to fool me. I’m not easily fooled. Just saying! And this series is not a stand alone and you should read them in order, just to really understand some huge things that are not deeply explained.

A solid thriller with a solid and somewhat frightening plot and I give it four stars. Loses a star because it is a little too long. With almost 700 pages I felt somethings could have been edited out to make the flow more smoothly. And there is a lot of characters and even though I’m Swedish and doesn’t have a problem with the names, I still forgot sometime who was who.