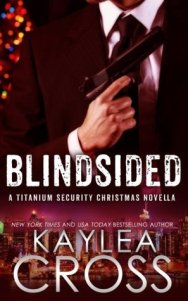 Goodreads synopsis: It’s a Titanium Christmas reunion… Grace and Alex Rycroft have just moved into their newly renovated house in upstate New York and they’ve invited the whole Titanium Security crew to celebrate an early Christmas with them. But not all is merry and bright. Unfortunately things don’t go as planned. When the unthinkable happens at a veteran’s charity event in the middle of Manhattan, the team must pull together to take down the attacker and rally around a wounded teammate in the tragic aftermath. With one of their own left fighting for his life, it’s going to take a Christmas miracle to pull him through and make the holiday season bright. (*Note: This novella is a final wrap-up of the Titanium Security Series and is not meant to be read as a stand-alone.)

The last book in the Titanium Security series and I cried like a baby. It was so wonderful to meet them all again, but “stuff” happens and it was terrible, but in the end it was the most perfect closure on a great series and I could not have asked for more. I have nothing more to say but only that this series is worth reading by everyone who likes romantic suspense in a war environment where both the male and female characters is strong and lovable. Perfect, just perfect. Kaylea Cross has several series in the same caliber and I hope they are just as good.

The order the Titanium series should be read in is as following:

I had six books on my TBR list for the month of May. Not including the one book from my book club and I’m so excited. I already started Death Note and Hollow City and I have already finished Blindsided. I’m on a roll right now. 😀 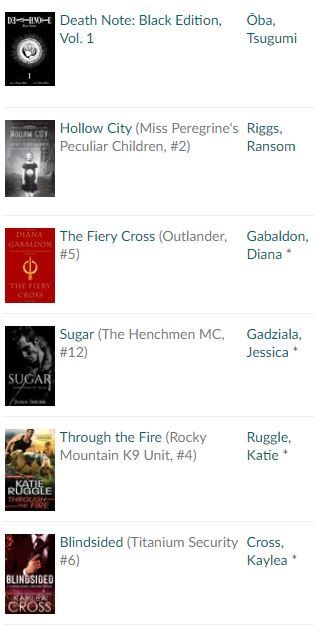 Death note: One of the horror, graphic novels I have really looking forward to. I have the black edition 1, which include vol 1 and 2 in one book, and it is beautiful.

Hollow city, the second book in the Miss Peregrine’s peculiar children series. It is time to continue the series since I have this one and the third one on my bookshelf. I have high hopes. I do hope not to high.

The Fiery Cross, the fifth book in the Outlander series. After the fourth book I’m not that excited to continue the series, but will give it a try. Maybe.

Sugar, the 12th book in the Henchmen MC series. I love these guys.

Through the fire, fourth book in the rocky mountain K9 unit. This series has been quite up and down for me, but this is the last one and it is time to close this series.

Blindsided, last book in the Titanium security series. I have wanted to read this one for long time, but never got to it. It is the last book in the series and I was so excited so I started and ended it the first day of May.

What are you planing on reading in the month of May? 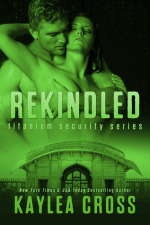 Goodreads synopsis:He left her when she needed him most…

Four years ago, Dr. Grace Fallon lost everything that mattered in a terrorist attack she barely survived. Now she’s stronger than ever and in Pakistan with a UN-sanctioned team for the most important assignment of her career. She’s dedicated her life to eradicating the world of chemical weapons, and long ago accepted the inherent risks associated with her job. Until the man whose memory has haunted her for so long suddenly reappears and inadvertently makes her the target of one of the most dangerous terrorists on the planet. Forced to accept Alex’s protection, it’s impossible to deny the white-hot attraction still burning between them. And while she trusts him to guard her from this new threat, Grace must once again decide whether to risk her heart to the man who once shattered her entire world.

Now he’ll risk everything to win her back…

Four years ago, NSA agent Alex Rycroft left Grace because had no choice. But never again. Malik Hassani has escaped custody, he’s on the run, and has locked onto Grace as a means to target Alex. This time Alex will do whatever it takes to protect her—and convince her to give them another chance. Walking away from her nearly destroyed him and now that she’s back in his life, he can’t let her go. When the unthinkable happens and Grace’s life hangs in the balance, he’ll sacrifice everything to save her—including himself.

My thoughts: I’m glad I finally got the chance to learn more about Alex and his history. He is the oldest character in the books and the most mysterious. I really liked the plot but it was somewhat slow written. And I feel that in a situation as the 5th book is taking place, should not be slow. At all! I did however like that I got to know how it would go with Dunphy. The 4th book quite ended on a cliffhanger when Dunphy regarded. It was hard to read but with a great end. Perfect when it comes to the circumstances.

Alex end Grace though  is quite slow and some what repeatably. Grace is hurt and I understand that but then they dont really talk about it. It just “fixes” itself and that was an downer.

The story about the terrorist is as exciting as ever. Cant say to much about it without giving out spoilers.

There is one more book in the series. It is an short book on 160 pages and more or less suppose to wrap any loose ends. I have read the five books in the series and will at some point in the future read the last one to. Just to be done. But I dont really feel the need to it. This book did not end on any cliffhangers and what ever question i sit left with is not that important to get an answer to. But I will still read it.