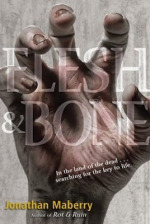 Goodreads synopsis: Reeling from the tragic events of Dust & Decay, Benny Imura and his friends plunge deep into the zombie-infested wastelands of the great Rot & Ruin. Benny, Nix, Lilah and Chong journey through a fierce wilderness that was once America, searching for the jet they saw in the skies months ago. If that jet exists then humanity itself must have survived…somewhere. Finding it is their best hope for having a future and a life worth living.

But the Ruin is far more dangerous than any of them can imagine. They are hunted by fierce animals escaped from zoos and circuses. They must raid zombie-infested towns for food and medical supplies. They discover the very real truth in the old saying: In the Rot & Ruin…everything wants to kill you.

And what is happening to the zombies? Swarms of them are coming from the east, devouring everything in their paths. These zoms are different. Faster, smarter, infinitely more dangerous. Has the zombie plague mutated, or is there something far more sinister behind this new invasion of the living dead?

My thoughts: I very much enjoyed this one as much as I enjoyed the first two books. But I do found this one to be a little of the same thing. It is still a great book and it is terrific written as usual. It fits well together with the other two books and there are some impressive characters to follow. However I feel that it has gotten a little bit stuck. There were several chapters where I legit was wondering “hasn’t I read this before? Haven’t we been here before already?”

The third book picks up around where the second book ended. And you as a reader are thrown into this action filled story right from the start. There is a lot of running, fights, zombies, crazy humans, animals, secrets, misunderstandings and so on. Just as there is in the first and second book. It starting to feel somewhat used. It is the same only under different circumstances. Do you understand what I mean here? It was like I read the first and second book all over again, just with some different characters and with a little different outcome.

At the end of the book we are at a crossroad and how the plot will continue and its outcome is anyone’s (who have not read it of course 😛) guess so far. I do like that. The not knowing, it’s exciting. We have been introduced too some new characters and a new “world” where the rules are not the same anymore. I do hope the fourth book brings me some different situations and more characters to fall in love with. It really is a great series. 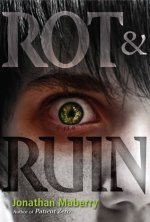 Goodreads synopsis: In the zombie-infested, post-apocalyptic America where Benny Imura lives, every teenager must find a job by the time they turn fifteen or get their rations cut in half. Benny doesn’t want to apprentice as a zombie hunter with his boring older brother Tom, but he has no choice. He expects a tedious job whacking zoms for cash, but what he gets is a vocation that will teach him what it means to be human.

My thoughts: I don’t know if I’m just incredibly lucky or if I have found a way to choose good books. Because my five star ratings and good books just keep pouring in. And I’m a little surprised. As much as I love Joe Ledgers series by Maberry (still more than this), not one of those books (that I have read) have received a five-star rating and yet this one does. But One thing is for sure, Jonathan Maberry takes my mind and heart by storm, Again!

This is a wonderful book and I am surprised over how much I loved it. It is a little different from what I normally read and it is a Young Adult book. YA books are often not for me due to that I often find the books a little meek and dramatic. Not in a good way. Anyhow, this book was nothing like that and it evoke feelings that I did not foresee it would.

Here we get to follow Benny. A fifteen-year-old teenager who live in a world post zombie outbreak. He was too young when the outbreaks began and he can’t remember a world before the Zombies. And I totally loathed Benny in the beginning. Yikes I hated him. Later, he grew on me and by the end of the book, I loved him. Him and his brother Tom. Tom however was old enough to remember the world before the zombies and he is the reason Benny still is alive. But misunderstandings and half-truths have made their relationship hard and they are not that close to each other as brothers should be. Different circumstances outside their own power makes them thrown together and they must work together and fight for their life’s and what’s right.

I often feel that Zombies, like vampires, are a subject that have been done to many times that there is nothing new about it anymore. But I think that Maberry has taken a step back and brought the subject back to its core and just stayed with what’s simple and that worked in favor of the story. It feels real and totally perfect. It even made me cry some parts.

I short, I totally loved it and can’t wait to read the other books in the series. I have ordered the whole box from Book depository and hope it will arrive soon. 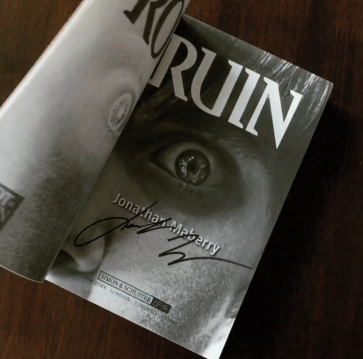 I’m really happy that I was able to find this book signed. I ordered it from some guy in USA and it took almost tree weeks for it to arrive. But I’m really happy and this is the first signed book on my shelf. Totally worth the money. 🙂