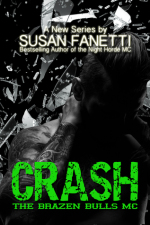 Conrad “Radical” Jessup, Sergeant at Arms of the Brazen Bulls Motorcycle Club, has life just about where he wants it: he’s free of a bad marriage, and his club is cruising along healthy and strong, their business relationships as solid as their brotherhood. He’s a contented man, riding his road at his speed.

Until a massive highway wreck brings a blonde on a little sportster crashing into his life.

Willa Randall is making a new life in Tulsa, working hard to put a demolished past in her rearview mirror. Trying to keep herself safe, she’s built a life insulated by locks and walls. Inside those walls, she’s alone, but she feels secure, and that’s enough.

Until a big, tattooed biker holds out his hand and helps her up from the pavement.

A love seeded in chaos grows fast and deep. But when chaos is a constant, can any love endure?

My thoughts: I have read one book by Fanetti, earlier back in 2016, and I can’t remember on top of my head, why I did not finish the Signal Bend series, but I must have had my reasons. Crash is the first book in the series about another MC Club that do exist in the same universe but still are a standalone series from the signal bend series.

It is a good plot and it certainly had potential, but for me, I had problem with connecting to the characters. And I don’t really know why. They are characters I usually love and connect with. Willa is this strong, kick ass woman, who have been in a shitty situation for like the last 10 years. But she has a fighting spirit and with her protecting dog Ollie she feels strong and ready for whatever will happen and she do not need a man to “save” her. Then we have Rad. Hard skinned, stubborn, overprotecting, sexy and hot alpha male who is happy to finally have peace in his life after a bad childhood and an even worse marriage. But he is open to his feelings and when Willa comes crashing into his life he takes the chance to explore and find even more.

How can I NOT love this? It is like I wrote the plot myself. It is like all that I want from this type of books. But still it didn’t do it for me. When I think about the highlights of the book, it still feels kind of grey and bland for me. I read the story but there was not really anything that captivated me. It is a good read. It’s just not a great read. One thing I really liked is that even though it is predictable, I could point out early in the story, stuff that would happen, it did not happen as I first had expected it. So even if it is predictable, it was not as predictable as I had predicted. Haha.

One thought on “Crash – Susan Fanetti”