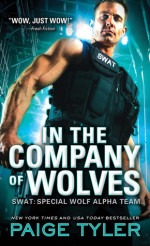 Goodreads synopsis: He opened his mouth to order her to drop the MP5 she had aimed at him, but nothing would come out. It was like she’d robbed him of the ability to speak. Shooting her wasn’t an option, though. And the idea of arresting her didn’t make him feel any better.

There’s a new gang of criminals in town who are organized and ruthless in the extreme. When Eric Becker, along with the rest of the Dallas SWAT team, ends up in the middle of a shootout, he immediately senses werewolves-a lot of them. Turns out, the new bad guys are a pack of wolf shifters.

In a spray of gunfire, Becker comes face-to-face with the most gorgeous woman he’s ever seen. Becker does the logical thing. He hides her and leaves the scene with the rest of his team.

Jayna Winston has no idea why that SWAT guy helped her, but she’s glad he did. Ever since she and her pack mates got mixed up with those Eastern European mobsters, everything had pretty much fallen apart.

So what’s a street-savvy thief like Jayna going to do with a hot alpha-male wolf who’s a police officer?

My thoughts: With a truly fantastic start we are once again thrown into this action packed story with clean cut and deep characters that are introduced in a way I really enjoyed. It was nice to once again meet some of the characters from the earlier books but still the focus was mostly on Becker and the new pack in town. It did however dropped off for me after approximately half way through and I did find the storyline somewhat thin. It did not keep up the heat and did not in the end deliver that punch I had expected and learned to associate with Paige Tyler.

It is not a bad book by far but it is not the best one either. A solid 3 star rating and I do like it. And the best part is actually that Tyler have put more energy on the werewolf mythology and we are introduced to other parts and aspects of the history. Beside Alphas we are also introduced to Betas and Omegas and there was some exciting twists. So I’m satisfied by that read and can recommend it.

One thought on “In the company of wolves – Paige Tyler”