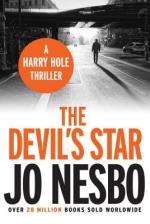 Goodreads synopsis: A young woman is murdered in her Oslo flat. One finger has been severed from her left hand, and behind her eyelid is secreted a tiny red diamond in the shape of a five-pointed star – a pentagram, the devil’s star.

Detective Harry Hole is assigned to the case with his long-time adversary Tom Waaler and initially wants no part in it. But Harry is already on notice to quit the force and is left with little alternative but to drag himself out of his alcoholic stupor and get to work.

A wave of similar murders is on the horizon. An emerging pattern suggests that Oslo has a serial killer on its hands, and the five-pointed devil’s star is key to solving the riddle.

My thoughts: Another excellent, complex thriller from the Norwegian author Jo Nesbø. As I probably said before, I was not a big fan of his two first books about Harry Hole. I absolutely loved the third and the fourth was a little mediocre. Now this. This is the book I would refer to when talking about Jo finding his “sound”, his writing style. I found it meticulously and selective in its plot, yet exciting and full of suspense. The alcoholism story is a lot bigger than in the earlier books. A lot more raw, emotional and there is sometimes you wonder if Jo is writing from a personal experience. That is how vivid and sentimental I found it.

Harry Hole is an character I can’t decide if I love or hate. He’s a loner, he’s prickly, he drinks. He does not like authority, yet he is a cop. He’s a broken man who for some reason never gives up even though he certainly tries. He can’t keep a normal relationship with anyone, he has almost no friends and he is down in the deep, trying to drink his sorrows away that you can’t help but wonder, where is this going to end.

Besides all that, it is a good book. I do love a good serial-killer plot even though I did find it was more of a side plot to the story than the actual main story-line. In fact in the mist of it all, there is dark secrets finally surfacing to the light. Even though I did not find the end as satisfying as I would like, it is certainly the perfect end if the series would stop here. I do however know that there is 6 more books about Harry Hole and the great thing is that you do not know where Jo will take us. It is impossible to foresee and he is that unpredictable.

One thought on “The Devil’s star – Jo Nesbø”