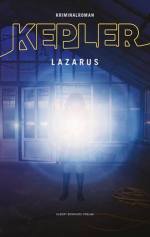 Goodreads synopsis: A dead man is found in an apartment in Oslo. The victim transpires to be an unknown grave defiler and trophy collector, and when the police open his kitchen freezer, they make a terrible discovery. A few days later, Joona Linna is contacted by a German police detective who asks for his help with a murder outside Rostock. Joona understands that the pattern he’s starting to see is insane, but at the same time it’s impossible to ignore.

The master of thrillers, Lars Kepler, is back with the seventh installment in the Joona Linna series.

My thoughts: Lazarus has not yet been translated to English but Lars Kepler and the series about Joona Linna is highly popular. That’s why I do not think it will be long before it have been translated. Just be patience. 🙂

The 7th book about the Swedish/Finish cop Joona Linna is finally here. I have been waiting for this one since June. Joona is finally back and trying to take control over his life. There is finally some good things happening when it all comes crashing down and burns. Surprised? No. Did I foresee it? Yes. Was it in the way I though? Well, pretty much. It is bloody and violent, certainly not a book for sensitive readers and highly predictable. At least in my opinion. I feel that Kepler did not take the story where it should have gone. Just chewed on what they already have and spit it out. The same but in a new form. Highly disappointing.

I found it quite boring that Kepler still going on with the same plot-line. It’s mediocre, overrated and even flamboyant at times. The Ahndorils aka Keplers need to learn when to stop. And that time was two books ago. Don’t do what I’m thinking you will do with that end you left us with. It is not interesting and I do not want it. Try something new. We are soon in 2019 you know. Not 2011.

One thought on “Lazarus – Lars Kepler”