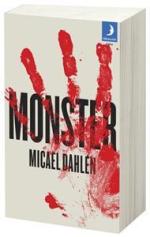 My thoughts:In Monster, written by the Swedish professor Micael Dahlén, you meet five of the world’s most famous murderers. Micael has interviewed and investigated their fascination about murder, blood and horror.

I was expecting a more fact based book with the mere details of the horrors these killers has committed. More focus on the interviews and Micaels thoughts around it. But it is in reality much more philosophical than I think a true crime, nonfiction book should be. I wanted facts as we know it, based on evidence and knowledge. Maybe some theories but not chapter after chapter about murder and its effect on the normal mind, society and theoretical thoughts about it all.

It is mostly my fault really. I did not read the synopsis carefully enough. If I did I should have realized that even though it goes under the true crime banner, it is also a lot more philosophical about the world we live in. A world about blood and death, money, love and celebrity.

I cannot find that this book has been translated to English yet. And if it ever will be, I do think you will find other books out there more rewarding than this one. It was a nice break from all the other books I read lately and short enough to start again from my reading slum. So points for that.

One thought on “Monster – Micael Dahlén”