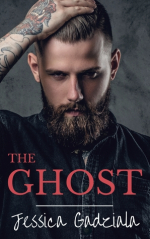 Goodreads synopsis: Sloane has everything she thought she ever wanted- a great career, a great apartment, great clothes, a life she had worked hard for.

Until one night, one chance encounter, one decision that changed everything.

With no options left, she enlists the help of Quinton Baird & Associates, who promptly inform her that she has to leave it all – the career, the apartment, the life she had worked so hard to build for herself – behind.

If all that wasn’t enough, her entire future – and life in general – was in the hands of a man whose coworkers called ‘The Ghost.’ Because that was what he did; he ghosted people, hid them, gave them new lives, made them impossible to find.

With no other choice, she agrees to his terms, climbs in a car with him, and travels almost clear across the country toward her new life. But the long hours on the road – and even longer hours in cabins and hotel rooms – together start to show her things. Like how unhappy she had actually been, how hollow her life was, how much she had denied herself in the name of superficial success.

And maybe, just maybe, how much she was starting to see how wrong first impressions can be, and how much a person can begin to mean to you when you decided to let them in…

My thoughts: Such a sweet story. You mostly knows what to expect while starting a Jessica Gadziala book. Sweet, funny, sexy, sometimes a little angst filled, exciting and a lot of hot. And this is certainly not an exception. But I did miss a little more suspense. I know I’m always say that about her books and I do know she is not that type of author. But I’m that type of reader and little more suspense either in the case or in the relationship would have done it for me. But it is still not in any way a bad book. I really loved it. I loved Gunner and Sloane. How due to preconceptions, their relationship started off on the wrong foot and when they finally realized that not everything i s what it seems, it really started to hit it off.

There is a lot of tension in this one. Tension in the case, the situations and between the characters. But still it is easy and fun to read. Maybe because you already know how it will end but that doesn’t bother me. You get to know some of the other characters and oh my, my heart is breaking for Kai. He has his own book next in line in the series so I do someday in the near future get to know what will happen.

One thought on “The ghost – Jessica Gadziala”