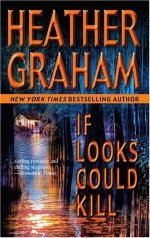 That was a lifetime ago. But the nightmares have returned; only, this time they’re of a faceless serial killer stalking women in south Florida. A killer she can’t see but who knows she is watching. Surrounded by her family, Madison knows she should feel safe, but she doesn’t.

And how much can FBI agent Kyle Montgomery protect her, when he can’t let go of the past they’ve shared? Madison is Kyle’s only link to the killer, but can they find the truth before the killer strikes again? Because sometimes, it’s what–or who–you can’t see that holds the greatest danger….

My thoughts: Nah! Nothing for me. Quite the same as always. Horrible history, broken hearts, murder mystery, stalker, new killings, FBI, macho man, irritating female protagonist and a situation that just feels dumb. Come on, they hardly talk but they do argue a lot. About the same thing over and over. If they actually had talked early in the beginning, the arguing would probably not have been as bad. And I probably would have liked the book a lot more.

It was a fast read without any real depth. The murder mystery was quite interesting, but you didn’t receive any clues to who the killer are so the whole guessing game for me fell flat. Oh Graham certainly tried to make other characters seem guilty but it was too obvious so I actually dismissed them from my “who the killer is” list early on.

Not overly fawn over the characters either. There is some stuff happening that just make you lose the respect for that character and creates a situation that is just awkward. To be quite frank, Kaila and Dan (two side characters) relationship and short chapters about them, are the one thing I actually liked and felt had the most depth. And the book was not even about them.

It is probably time to realize that Graham is not an author for me. I have read five of her books but not one of them have received a higher rating than 3 star. Average rating is 2.8. It is time to spell the flowers and confess to myself that it doesn’t matter how much the synopsis appeal to me, she is just not an author that I like to read. Unfortunately.

3 thoughts on “If looks could kill – Heather Graham”