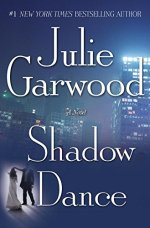 Goodreads synopsis: Jordan Buchanan is thrilled that her brother and best friend are tying the knot. The wedding is a lavish affair–for the marriage of Dylan Buchanan and Kate MacKenna is no ordinary occasion. It represents the joining of two family dynasties. The ceremony and reception proceed without a hitch–until a crasher appears claiming to be a MacKenna guest. The disheveled and eccentric professor of medieval history warns that there’s “bad blood” between the couple’s clans, stemming from an ancient feud that originated in Scotland, and involving the Buchanan theft of a coveted MacKenna treasure.

Jordan has always led a cautious life and has used her intelligence and reason to become a successful businesswoman. So she is intrigued but skeptical of the professor’s claims that the feud has been kept alive by the grave injustices the Buchanans have perpetrated over the centuries. But when Noah Clayborne, a close family friend and a man who has never let a good time or a pretty girl pass him by, accuses Jordan of being trapped in her comfort zone, she determines to prove him wrong and sets out on a spontaneous adventure to the small, dusty town of Serenity, Texas, to judge the professor’s research for herself.

Maneuvering through a close-knit community in which everyone knows everyone else’s business, Jordan never anticipates the danger and intrigue that lie in her path, nor the threat that will shadow her back to Boston, where even in familiar surroundings, her life is at risk.

A powerful thug who rules by fear, a man who harbors a simmering secret, and an unexpected romance that pierces all defenses–beloved author Julie Garwood weaves these dazzling elements into a brilliant novel of romantic suspense. Shadow Dance is a searing tango of passion and peril.

My thoughts: This was so good. So, so good! I absolutely love Noah and Jordan. I love how different they are and even though their long history as friends, they never were any romantically inclined to each other. Their feelings never just appeared but slowly grew, together with their personality and everyday life, is just such a great line to follow. It is a deep, connectable story with an interesting side plot that to be quite frank, I never really needed. It was the cherry on the ice cream but oh, what a ice cream.

The whole book is just so warm, fuzzy, exciting with a lot of suspense, hilarious characters, deep connections and just wonderful romantic suspense. This is what I want and hell, you did it again Garwood. You freaking did it again.

Unfortunately it do end on a cliffhanger. Not one of those bad ones but still a cliffhanger. It may be quite interesting to get to know all the answers someday, but still, at this point, I don’t feel the need for it. So on that note, I do really recommend this series and even though there is cliffhangers, there is no bad ones. And it is just so worth it.