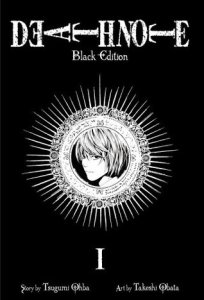 Goodreads synopsis: Light Yagami is an ace student with great prospects–and he’s bored out of his mind. But all that changes when he finds the Death Note, a notebook dropped by a rogue Shinigami death god. Any human whose name is written in the notebook dies, and now Light has vowed to use the power of the Death Note to rid the world of evil. Will Light’s noble goal succeed, or will the Death Note turn him into the very thing he fights against?

“The death god is quite funny even though he looks like something taken from nightmares.”

I find myself split in my opinion about the first volume of Death Note. I actually don’t like the main character that much and usually you are supposed to do that so I’m quite confused. The main characters is supposed to be the hero you are rooting for and wish the best of luck to. But Light is no hero. He started something with good intentions but later turns just as bad as the bad guys he is targeting. In the end he is no better than those criminals he’s erasing from this world. The death god is quite funny even though he looks like something taken from nightmares.

And the story is good and exciting. I really like the way it is built, the artwork and the feel of the book. It ended when the suspense was at its peak and I just had to throw myself on my phone to order the next on in the series. Its that good. Now I just have to wait two weeks for the second one to arrive. hehe

I’m not an avid reader of graphic novels but I’m beginning to understand the appeal and I really recommending this one.