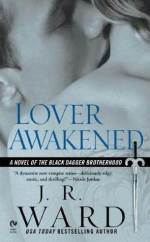 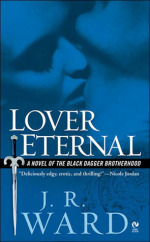 Goodreads synopsis: In the shadows of the night in Caldwell, New York, there’s a deadly turf war raging between vampires and their slayers. There exists a secret band of brothers like no other-six vampire warriors, defenders of their race. Possessed by a deadly beast, Rhage is the most dangerous of the Black Dagger Brotherhood.

Within the brotherhood, Rhage is the vampire with the strongest appetites. He’s the best fighter, the quickest to act on his impulses, and the most voracious lover-for inside him burns a ferocious curse cast by the Scribe Virgin. Owned by this dark side, Rhage fears the time when his inner dragon is unleashed, making him a danger to everyone around him.

Mary Luce, a survivor of many hardships is unwittingly thrown into the vampire world and reliant on Rhage’s protection. With a life-threatening curse of her own, Mary is not looking for love. She lost her faith in miracles years ago. But when Rhage’s intense animal attraction turns into something more emotional, he knows that he must make Mary his alone. And while their enemies close in, Mary fights desperately to gain life eternal with the one she loves…

My thoughts: Warning for a small rant. I will try to keep it on the down low. It was a good book. A real page turner. But not as good as the first book and as I’m thinking now, not as good as the third book. Yes I had to jump right into the next one since it ended on a cliffhanger and I just had to know how it would end.

I never really fell for the characters. The love story is overused and quite predictable. When the side characters are more interesting than the main characters, there is clearly something not working for me. I didn’t really like Mary and Rhage didn’t do anything for me. I remember Rhage, from the first book, as a funny, sexy, devilish, and charming character. Now he is just whiny and feels sorry for himself. Yeah, yeah! You have a curse. Boohoo! Get over it and move on. You have had a couple of hundred years so you should have been miles ahead by now. But yeah, it was just so repetitive.

I really liked the plot however and how the lessers had a big part and how all the other characters just built up to the story of the third book. It was interesting and quite captivating. The ending came a little fast but it made it easy for me to just throw myself right into the next one.

I really like Wards writing and her version of Vampires which feels just so right. This one was not a favorite but I still like the series and hopes the third one will be even better. 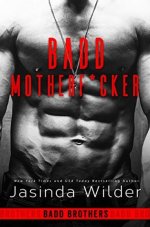 Goodreads synopsis: Your wedding day is supposed to be the happiest day of your life, right? That’s what they say, at least. I went into that day hoping I’d get the happiest day of my life. What I got? The worst. I mean, you really can’t get any worse of a day without someone actually dying. So…I may have gotten just a little drunk, and maybe just a tad impetuous… And landed myself in a dive bar somewhere in Alaska, alone, still in my wedding dress, half-wasted and heart-broken.

***
Eight brothers, one bar. Sounds like the beginning to a bad joke, yeah? I kinda think so. Wanna hear another joke? A girl walks into a bar, soaking wet and wearing a wedding dress. I knew I shouldn’t have touched her. She was hammered, for one thing, and heartbroken for another. I’ve chased enough tail to know better. That kinda thing only leads to clinginess, and a clingy female is the last thing on this earth I need. I got a bar needs running, and only me to run it—at least until my seven wayward brothers decide to show their asses up… Then this chick walks in, fine as hell, wearing a soaked wedding dress that leaves little enough to the imagination—and I’ve got a hell of an imagination. I knew I shouldn’t have touched her. Not so much as a finger, not even innocently. But I did.

My thoughts: Reading is subjective and since this one has as high rating as it has, clearly it is a likable book. It just didn’t work for me. I do not see my self as a prude or in any other way abashed when it comes so sex. But when the sex scenes actually bore me out, which is clearly suppose to be the highlight of the book, I just can’t take it.

To be honest, the story around the sex-scenes is just weird. It started of good and I can understand the reaction when you find out that your fiance is sleeping with the bridesmaid on the day of the weeding. But it is the rest that irks me. It is the same thing in another cover. The Hero is an total asshole who suppose to be the most grownup and the oldest of 8 brothers. The heroin is suppose to be this strong, kick ass girl, no one piss on, and she does the complete opposite. It is to cheesy, to blah and to over the top for my taste. It is more like a porn-video, where the story is just to give you some time before the sex starts. But we all know that it is not the story that matters. As same as we know men do not read naked magazines “for the articles”.

Oh and one last thing. The books is written in a neck breaking speed. Everything that is happening, is happening in just three days. THREE DAYS! It is rushed and there is more introduction to the other 7 brothers, than the main characters actually talk to each other. It is like an introduction book on the next 7 character/books that will be released. And the explanation in the end! WHAT? I do not get it. How can that even be an alternative? It is just weird and wrong and not suitable. If I had any hope for a good ending, that totally trashed it for me.

So, No. Nope. Not happening! This is not a series for me to continue. The whole thing was just a bad experience. And if Wilders books are all like this, she is not an author for me.