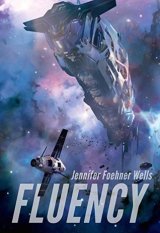 Goodreads synopsis: NASA discovered the alien ship lurking in the asteroid belt in the 1960s. They kept the Target under intense surveillance for decades, letting the public believe they were exploring the solar system, while they worked feverishly to refine the technology needed to reach it. The ship itself remained silent, drifting.

Dr. Jane Holloway is content documenting nearly-extinct languages and had never contemplated becoming an astronaut. But when NASA recruits her to join a team of military scientists for an expedition to the Target, it’s an adventure she can’t refuse. The ship isn’t vacant, as they presumed. A disembodied voice rumbles inside Jane’s head, “You are home.”

Jane fights the growing doubts of her colleagues as she attempts to decipher what the alien wants from her. As the derelict ship devolves into chaos and the crew gets cut off from their escape route, Jane must decide if she can trust the alien’s help to survive.

My thoughts: First off, I want to say that i really dont like cliffhangers. If you do need to break up a book in two, do it at least a little more satisfying. It was like just hit pause in an movie and wait a year before you will see the rest. I´m not even sure that I will read the second book. Mostly because I feel such an dissatisfaction.

So the book earns its two hearts for the writing. I like the writing because its easy to read and most of the times it is also easy to understand. It can sometimes be hard to understand all the technology in Science fiction. But in the book I only had like two or three times that I had hard to understand or make myself an mental picture. I also do like the red thread throughout the book. It feels consist and are quite exiting. And it did have some really exciting chapters.

What i do not like is the characters. They feel kind of superficial and I think the author could have done a better job to make an connection between reader and character. I do not like the romance bit either. I would be a lot more satisfied if i could get closure there, since it never had a big part though out the book but still was a meaningful subject that really never happen anything with.

So overall, a book that can be great for the right person. I´m just not that person.