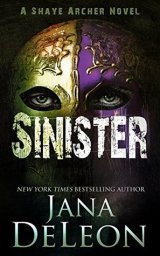 Street kids are disappearing, but how do you report that to the police when, from their standpoint, the missing people didn’t exist to begin with? Hustle is certain that something bad has happened to his friend Jinx, and the only person he can turn to for help is private investigator Shaye Archer.

Because Hustle helped the young PI while she was investigating her first case, Shaye has already formed an opinion as to his character and believes he’s telling the truth. As she digs deeper into Jinx’s disappearance, she discovers that Hustle’s friend isn’t the only one missing. As a frightening pattern emerges, Shaye wonders if she can find the missing kids…before it’s too late.

My thoughts: Oh my! After I read and rated the first book 5 stars in this series about Shaye Archer, I thought “this cant get any better!”. So wrong I had. It could and it did get better. So good that adrenaline is still pumping out trough my veins. I absolutely love this woman. She is ice cold cool, but still hot and emotional, with an earth crust thick wall around her self. She is compassionate, honest and trough out a really good person. Minus all her history, I want to be her. But her history, I do not want.

The first book was great, the second even greater. You get to meet some of the characters from the first book again and get to know them better. DeLeon is an terrific writer who makes you as an reader in there in the story with the characters. This is the second book I have read by Deleon but if she always writhes like this, she have a strong ability to be one of my favorite writers.

The book is not in the romantic genre, but I have my suspisions that it could be in the future. And even tho I mostly read books with some kind of romantic plot, this is refreshing and oh so great.

Have you read anything by Jana Deleon?