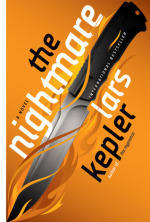 Goodreads synopsis: A drowned young woman is discovered on an abandoned pleasure boat drifting by the Stockholm archipelago—strangely, her clothes are dry. The next day in Stockholm, a man turns up dead, hanging from a lamp hook inside his completely bare apartment—but how could he have hung himself with no furniture to climb upon? As Detective Inspector Joona Linna begins to piece together the two mysteries, he discovers that they are a mere prelude to a dizzying and dangerous course of events.

My thoughts: For you who do not know it, Lars Kepler is actually a pseudonym name for the married couple Alexandra and Alexander Ahndoril. They are both published authors but together they write the series about Joona Linna under the name Lars Kepler. This is the second book in the series and even though I’m not much for “local” litterateur, I really like this book.

I listened on the first book about Joona Linna, back in 2012. I know that I also started the second book but could not remember if I actually finished it. There where parts that i recognized but i dont remember it all so I just listened on the whole thing again to be sure.

This one is the continuing book about Joona. The first book did not end on a cliffhanger but you as an reader should know that there is a lot of details about Joona that you dont really get to know. Also in this book. But i recon that later on in the series, all my questions will be answered.

I like the book even though I think the story about weapon export is a little dry and there is some parts in the book that really do not make sense for the books plot. I do like that I have gotten to know Joona a little bit more but still do not know all of his “secrets”. It is a book I can recommend but be advised that this is a slow burner in 500+ pages. Not as fast pacing (in my opinion) as the first book, but sometime it is nice withe those to.

One thought on “The Nightmare – Lars Kepler”