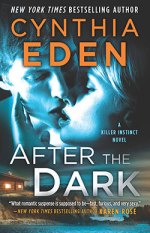 Goodreads synopsis: Former FBI agent Samantha Dark was one of the most respected profilers in the bureau, an expert on the twisted minds and dark hearts of the most depraved criminals. But when her own former lover turned out to be the serial killer she was hunting, Samantha’s career was destroyed. Blamed for the FBI’s failure on the complex case, Samantha fled Washington, DC, for the quiet anonymity of Alabama.

Now an all-too-familiar killer is hunting once again. She can catch the sadistic assassin, but that means putting her trust in her former partner, Blake Gamble. Ex-military, Blake is tough, protective, precise. With her entire life on the brink, she knows he wants her back in the FBI…and possibly more.

But someone else wants her, too. A threat is waiting in the dark, a killer who has set his sights on the ultimate trophy victim—Samantha.

My thoughts: I don’t know if I just had to high hopes or what not for this book, but no matter what the reason, I was not happy with the result. It is so repetitive. Yeah I get it that the characters want something or need something but do you have to keep thinking it, saying it and be angry if you don’t get it and keep it on a loop even after you get it. It destroyed the story. Specially since the story could have been good, even though you get to know the truth early on.

I still liked the book enough to give it a two star. It is still not positive but since the story was intriguing even though no suspense or excitement, I got through it. It is an average read. Not something I would recommend to friends if they not specifically requested something in this line. However Eden has done a great job with capture a killer’s mind and the law enforcement work and even if the whole story was predictable, it still was somewhat entertaining.

But I didn’t like the character’s dynamic to each outer. Someone who do not trust someone, don’t just show up the next day and have complete and utterly trust in that person. And the relationship between Gamble and Dark just didn’t feel real at all and quite forced. There was nothing with it that I liked and that makes me a little sad.

So, to conclude it all, I liked the story even though it was predictable and you got to know it all already in the beginning. I did however don’t like the characters and the general dynamic in the story. Probably had higher hopes for the book, than what I should have had.

One thought on “After The Dark – Cynthia Eden”