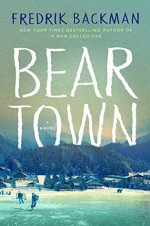 Goodreads synopsis: People say Beartown is finished. A tiny community nestled deep in the forest, it is slowly losing ground to the ever encroaching trees. But down by the lake stands an old ice rink, built generations ago by the working men who founded this town. And in that ice rink is the reason people in Beartown believe tomorrow will be better than today. Their junior ice hockey team is about to compete in the national semi-finals, and they actually have a shot at winning. All the hopes and dreams of this place now rest on the shoulders of a handful of teenage boys.

Being responsible for the hopes of an entire town is a heavy burden, and the semi-final match is the catalyst for a violent act that will leave a young girl traumatized and a town in turmoil. Accusations are made and, like ripples on a pond, they travel through all of Beartown, leaving no resident unaffected.

Beartown explores the hopes that bring a small community together, the secrets that tear it apart, and the courage it takes for an individual to go against the grain. In this story of a small forest town, Fredrik Backman has found the entire world.

My thoughts: This was one hard book to read. It was a lot darker than first expected and was certainly not what you would expect from Backman. He has changed his tone and the seriousness of it is mindblowing. And the worst part is, I know this from real life experience. I know how it is to grow up in a town that is dying. I know how it is to live so far north that in a year, you have more dark days than light days. Where snow is more than a way of life. It comes a part of you. When I moved south, I did miss all that snow, but life was just so much more simpler without it being so much of it. And I still do not live far enough south to get no snow at all. The difference is that where I come from, it’s not Hockey that is the big sport everyone love. Where I come from there is two type of “family’s”. Those who ski some way or another. Or those who hunt. I’m from a hunting family. That’s what we do. Live for. Talk about. And plan to do next season. Sometime I miss it, but in reality I’m more of a city girl with one booted foot in the woods and one foot in a 6 inch high heel outside the city’s IT club. When I don’t read of course. And I like it just like that. The best of two worlds. But I do understand that mindset from a small community. We take care of our own. We offer coffee or beer instead of asking how you are. I do not always agree, but I do understand.

Even though the book could be described as hard, cold, dark and so Swedish that it is incredible Backman has been able to put it into words. But still the book is warm, fuzzy and lovable. Some parts of it I had to seek comfort in the arms of my man. I wouldn’t be able to read more if not. I have few triggers when it comes to books but one of them is in this book and even tough it is not that graphic, a girl/woman do understand without not being in that situation herself. And it is heavy. Maybe more heavy for me this time than what it would have been if I didn’t recognize the characters as people I grown up with. Backman understands. He is Swedish to. Other parts I feel that the book is awesome and even some parts a little funny. The seriousness of it all takes a big toll of it tough.

The writing is as always, fantastic. Backman has a great ability to put worlds, characters, minds, feelings and his own soul  between the lines in his books. You can just feel him and it is a wonderful experience. One I do not often get to feel when reading books. Often when I give a book a top star rating, it is more for the story itself. This one it is more for the meaning of the story and what it leaves me with when done. It is impossible to explain.

I do however miss Backmans funny, easy-going, fuzzy heartwarming way of writing his books. This one is just a little too dark and it will take me sometime before I’m ready to read the second book in the series. I will someday, but right now my soul is just not ready for that kind of hit. Soul-wrenching. That’s a word I would describe this book with. Soul-wrenching!