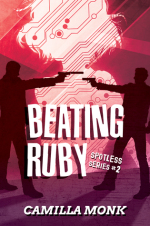 Goodreads synopsis: Life hasn’t been quite the same for computer engineer Island Chaptal since March, an OCD-ridden professional killer, burst into her life to clean her bedroom and take her on a global chase for a legendary diamond. Sadly, the (hit) man doesn’t just break bones; he breaks hearts, too.

Since then, Island has found solace in Alex—the perfect boyfriend—and Ruby, a software project about to revolutionize online banking security…for the worse. When Island’s boss is found dead after allegedly using Ruby to steal a vast fortune, it’s up to her to clear his name and recover the money. Someone else wants answers, though, and this time, Island might be in over her head.

From New York to Zürich, it’s going to take the return of a cleaning expert, a mini-octopus, and Island’s wits to beat Ruby. All while deciding whether to trust a man who already jilted her, or one who may have his own deadly secrets…

My thoughts: This is the second book in the Spotless series. It is not a standalone and you will have to read the first book before this one to really understand some of the references. I would recommend that you do not read this review either if you haven’t read the first one, since it will be a little “spoilerish”. There are things I can’t discuss without referring to the first book. You do not have to worry if you already have read the first book.

You have been warned!

In this book we gets to follow Island, 6 months after the Tokyo fiasco and finally in a good place again. Then her boss goes and kill himself, her big project gets stolen and there is something that doesn’t feel right to her. As a new, stronger, woman she sets out to try and find the truth about what really happened, but she finds more truth than she had barged for. Then in walk March and you could say that the whole situation gets a 100 times worse. Or better. Depends on your point of view.

I can’t say that this book is as good as the first one, but it is still good. Not as fast paced and explosive but still entertaining. It was nice to meet all the characters again. The whole March and Alex situation is certainly entertaining but still a little hard to wrap my mind around. It was not until the end that I really understood what have been going on the whole book. By then I felt some things could have been changed on, written in another way to give the story a little more depth about those three characters. There is no cliffhanger per say, but still an indication that there will be a third book. Now I know that it already exists a third, but at one point there wasn’t. You can see that in the book. I do however not like Islands passivity in this book. She stands in situations with blind eyes and takes no action until the end.

I think the third book will be really entertaining and I would recommend this book to anyone who would like to have some explosive action, quirky characters, secrets, funny humor and heartwarming love.