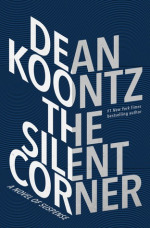 Goodreads synopsis:  very much need to be dead.

These are the chilling words left behind by a man who had everything to live for but took his own life. In the aftermath, his widow, Jane Hawk, does what all her grief, fear, and fury demands: find the truth, no matter what.
People of talent and accomplishment, people admired and happy and sound of mind, have been committing suicide in surprising numbers. When Jane seeks to learn why, she becomes the most-wanted fugitive in America. Her powerful enemies are protecting a secret so important so terrifying that they will exterminate anyone in their way.
But all their power and viciousness may not be enough to stop a woman as clever as they are cold-blooded, as relentless as they are ruthless and who is driven by a righteous rage they can never comprehend. Because it is born of love.

My thoughts: Koontz is and will for always be, a horror author for me. He is the first author I read in the genre horror. Not Stephen King as so many others. No I read Koontz and have for the most time loved his books. But sometime it is refreshing to read something new from your favorite author. Because Koontz is one of my few male favorites that I still read to this day. I love his way of writing and his immense imagination. I was intrigued to try this one, the first book in his new (well it isn’t that new anymore :P) series, where a female is the lead protagonist in the fight against a corrupt government and crazy scientist men.

I really liked the idea. The idea of a modern way of brainwashing. Totally frightening of course but still interesting. A lonely, strong female hero on the verge to declare war on the USA government. A female character who is smart, strong and immensely intuitive. I like the bad guys and I like the way of the plots development and the writing style. Even though Koontz could have avoided the huge amount of chapters. They were ridicules. I like to read by chapter (as so many other readers) but some were so short that they didn’t even take up half a page and then the next chapter just kept on going where the first one ended. Did not understand the reason for it, and I did not like the small brake in my reading speed it created.

Even though I liked the book, I have a huge problem with it. Not the chapter thing, no. What I did not like is how slow it got. It started so good and I couldn’t stop reading. Then something happened and I lost interest. It started to slow down and drag. Not even in the end did it pick up enough for me to feel that strong connection that I did in the beginning. I would however love to see this plot with characters as a movie or an series since it did intrigued me. It is just the execution of it that bothers me.

One thought on “The Silent Corner – Dean Koontz”