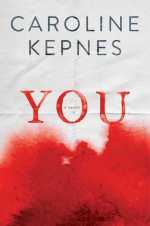 Goodreads synopsis: When a beautiful, aspiring writer strides into the East Village bookstore where Joe Goldberg works, he does what anyone would do: he Googles the name on her credit card.

There is only one Guinevere Beck in New York City. She has a public Facebook account and Tweets incessantly, telling Joe everything he needs to know: she is simply Beck to her friends, she went to Brown University, she lives on Bank Street, and she’ll be at a bar in Brooklyn tonight—the perfect place for a “chance” meeting.

As Joe invisibly and obsessively takes control of Beck’s life, he orchestrates a series of events to ensure Beck finds herself in his waiting arms. Moving from stalker to boyfriend, Joe transforms himself into Beck’s perfect man, all while quietly removing the obstacles that stand in their way—even if it means murder.

My thoughts: This is a highly uncomfortable book about a seemingly normal guy who works in a bookstore. There is however nothing normal about Joe, who is both manically obsessive and manipulative. He is stalking this girl and as a girl myself and also a girl who is somewhat active in social media, this is terrifying. Totally utterly terrifying. Not that I think that I ever will be stalked or ever going to stalk someone, but how easy Kepnes made it seem. It is kind of sick of how I was shifting my focus and who I was rooting for throughout the book. Kudos to you Kepnes who with this book have made me uncertain and question myself.

Well the book is certainly making you think. At first you are on Becks side of the whole thing. But later on it is like this Joe character does not only manipulates Beck but also me as a reader. I’m rooting for him and even feel sorry for him. There was a couple of chapters where Joe was really sad and I just wanted to hug him, until I remembered who he is and what he does. I really did not like Beck for most of the book and could not for my life understand what Joe saw in her, which only made it even more insane and I do not know how I’m supposed to feel. I’m scared, disturbed and feeling all this icky feelings but in the same time I’m also outrageously impressed.

The book is weirdly captivating and addictive. Even though I did not find it that good of a read in total at the end, I still could not stop reading. I needed to know what would happen. It is messed up, highly crude,  gross and appalling, realistic. It is probably the best, worst captivating book, which I don’t even like that much, that I have ever read. How weird is that?

2 thoughts on “You – Caroline Kepnes”