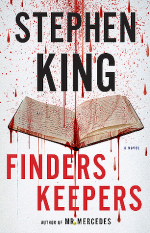 The genius is John Rothstein, an iconic author who created a famous character, Jimmy Gold, but who hasn’t published a book for decades. Morris Bellamy is livid, not just because Rothstein has stopped providing books, but because the nonconformist Jimmy Gold has sold out for a career in advertising. Morris kills Rothstein and empties his safe of cash, yes, but the real treasure is a trove of notebooks containing at least one more Gold novel.

Morris hides the money and the notebooks, and then he is locked away for another crime. Decades later, a boy named Pete Saubers finds the treasure, and now it is Pete and his family that Bill Hodges, Holly Gibney, and Jerome Robinson must rescue from the ever-more deranged and vengeful Morris when he’s released from prison after thirty-five years.

My thoughts: “Shit don’t mean shit” – Jimmy Gold. The main character in the trilogy series written by John Rothstein (who after some Googling I believe is a alter ego to King himself). It is inception. This book is a book about a book. King certainly understands how us readers work and all the feelings we can experience while reading. He understands that in some degree we actually can get a little obsessed and there is probably a few people out there who have or could kill for their obsession. Who knows. We are 7 billion people on this planet so it is not that unlikely.

Anyway, I did not find this one as good and well done as the first in the series. The story was intriguing but the main character (Bill) didn’t have a big part at all. He was the side character who is coming in to “solve” everything in the last 50 pages. And I’m a little sad about that. I was looking forward to follow Bill and Holly for another book but instead I’m quite disappointed. My main thought about the book is that it probably would stand strongest on its own, like an stand alone. It does connect with the first book but everything is so well explained that you hardly notice.

I have read some reviews where it talks about how Finders Keepers is a recycled Misery (also written by Stephen King) and that they are disappointed on King who wrote about the reader/fan idea once again. I however have not read Misery but judged by the synopsis, I do not feel that way at all. I find this plot to be completely different. Specially since Rothstein don’t have a living part in the book.

The ending is a lot more in King’s style and it does end one a little cliffhanger. I will read the third book someday. I have to. Because I believe that it is in that book the real stuff is gonna happen. And it is gonna be great.