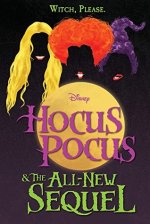 One thought on “Hocus Pocus & The All New Sequel – A.W Jantha”