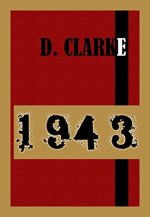 Goodreads synopsis: The book doesn’t have a fulfillment synopsis so I will try to write something short about it.

Here we meet Letty. A young teenager who is thrown back in time from 2017 to 1943 Harlem, New York. The time is completely different than what he is used to and you get to follow Lettys struggles to adapt to this hard times. He make friends in a world where being a woman or black is like a sin and you get to follow his struggle to find a way to get back to his own time. We meet some nice characters in this modern time travel story.

My thoughts: I received this book from the author against an honest review and I must say that I am pleasantly surprised even though I had some big problems with it. I really like time travel books and that is one of the reasons I choosed to read this book.

First off, the language is really weird for me. Let me remind you that English is not my first language and even though I mostly read in English, it will always be a second language to me and this book was just a little too hard. There is no good flow in the language and it keeps switching from proper use of words to slang and in between there are some big words, which I feel don’t belong in the telling of the story. The lack of easy use of the English language and flow did the story hard for me to read and I had to take breaks ever so often due to the strain it put on my mind. I also feel that the book is missing some depth. Both in character reactions, feelings and story wise. This can of course be a result due to the language and my inability to read the book with ease. Unfortunately, I would not recommend the book to someone who do not have English as first language or is a stronger reader than me. Oh and I don’t like the cover. It doesn’t do the book justice.

I do however like the story itself. It is an entertaining idea and it is quite exciting. Even though there is nothing new in the theory about time travel and Clarke have clearly choosed the way that is the most simple and easiest to understand it is likable. I like Letty and I like the characters he meet in 1943. They made the story come alive. I also like the little twist with “Red” and that I didn’t know who he was until the end of the book. The story is also a little sad and it makes you think, which I see as an positive thing.

Would I read anything by Clarke again? Yeah probably. If the book have gone trough some heavy editing first by a professional who could ease up the language for people like me. Until then, No! 🙂