What a month. I’m so happy that I got so much reading done. Now I have catch up with my Goodreads challenge and it looks brighter for the possibility that I will make my goal of reading 100 books in one year.

Anyway. Hoping for just as good reading month in October.

Wow. Four books read this month. That is so bad. There is several years since I read so little in one month. But I have just not had the time. With the house and everything, reading has not been a priority. Now that we are starting to get settles, I due hope that I will find time for more reading in August. 😀

This has been a rough month reading wise. We have bought a house, I’m in the middle of moving and the time and energy has just not been there. But I did get some books in and most of them was either short and easy or an audiobook. Will probably not have a better month in July due to the new house but due hope that I get some audiobooks in anyway.

I have had a great reading month. Started off with an little reading slump which I overcame and then it was book after book. 🙂

Favorite book this month: Couldn’t choose one due to that I have two favorites this month. Folk med ångest by Fredrik Backman and Through the fire by Katie Ruggle. 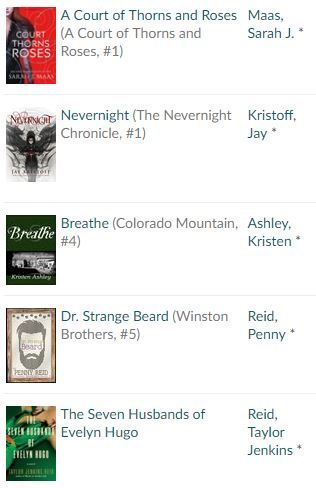 New month, new To Be Read list. I’m quite happy with my results from February. I had selected 6 books (one was a February book club book) and I read all besides one. Well actually two since I DNF’ed one of them.

“The Seven Husbands of Evelyn Hugo” is the one I never started in February. I have put it on my list for March since this is a book I really want to read, I just didn’t get to it last month.

Other than that I have the fifth book in the Winston Brothers series, the fourth book in the Colorado Mountain series and the first book in a new series, The Nevernight Chronicle. The last one, “A court of Thorns and Roses” are actually a reread I have had a desire for lately.

There will also be a sixth book on the list but that one I do not know until my book club have had its meeting on Wednesday. Pretty excited for March and I think this will be a great reading month.

What are you planing on reading in March?

I have been pretty mentally preoccupied this month and there was a lot less reading than usual. I just had troubles with focusing and there where things in my life I just needed to let it take its course and hope the ability to read returned. And yes it did. 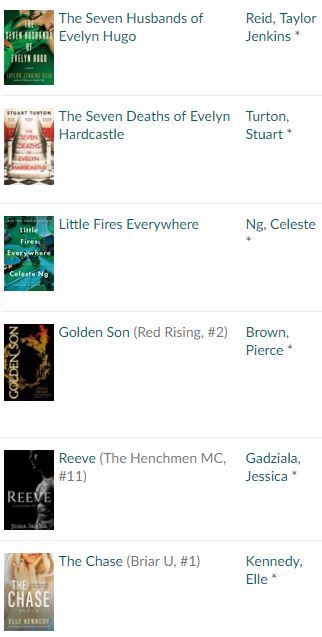 I have decided to try a TBR lists for every month. I do not know how many books I should choose and so on, but I see February as a trial and error month.

I have selected six books I wish to read this month. I do own everyone of them and I will try to only select books I already own.

Golden son, Reeve and The chase is books I have had in my library for a long time now and I wish to get them read. The seven deaths of Evelyn Hardcastle I choosed due to the highly interesting synopsis and The Seven husbands of Evelyn Hugo I choosed due to the highly raving there is about it in the bookish community. I do hope it isn’t hyped to death.

Little Fires Everywhere is actually my book clubs choice for January but Bookdepository was so slow so I didn’t receive it until the end of January. The meeting is however not until Thursday so I will have the time to read it.

What are you planing on reading in February?