What a month. I’m so happy that I got so much reading done. Now I have catch up with my Goodreads challenge and it looks brighter for the possibility that I will make my goal of reading 100 books in one year.

Anyway. Hoping for just as good reading month in October.

Wow. Four books read this month. That is so bad. There is several years since I read so little in one month. But I have just not had the time. With the house and everything, reading has not been a priority. Now that we are starting to get settles, I due hope that I will find time for more reading in August. 😀

This has been a rough month reading wise. We have bought a house, I’m in the middle of moving and the time and energy has just not been there. But I did get some books in and most of them was either short and easy or an audiobook. Will probably not have a better month in July due to the new house but due hope that I get some audiobooks in anyway.

I have had a great reading month. Started off with an little reading slump which I overcame and then it was book after book. 🙂

Favorite book this month: Couldn’t choose one due to that I have two favorites this month. Folk med ångest by Fredrik Backman and Through the fire by Katie Ruggle.

A kind of average reading month. I did read all my books on my TBR list and a couple of more so I’m happy.

Every month I pick 2 eBooks from my kindle, 2 physical books from my bookshelf and 1 book from my to buy list, that I’m allowed to buy (yeah I’m on a buy books ban again) and planning to read them in the following month.

In March I had a reread and Breathe by Kristen Ashley left to read but at the time I’m writing this, I plan to start Breathe as soon as I’m done with the book I’m currently reading and it will probably happen before the end of March.

But anyway, following books are what I plan to read in the month of April. As usual there are a sixth book but that one I will not know what it will be until the meeting of my book club in the beginning of April. 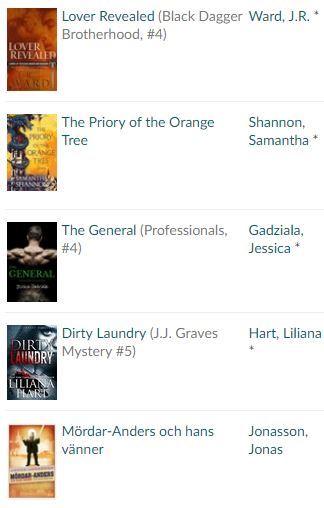 The first book I chose, I’m looking forward to read since it is the forth book in the Black Dagger Brotherhood series. That series has been “out of this world, great” so far.

The second book is highly anticipated which had its release in March. It is a high fantasy on almost 1000 pages. It is almost a little frighting to start even though I usually loves big books.

The third book is one in a series I follow written by Jessica Gadziala, one of my favorite authors, where we finally suppose to be told what really happened to Eli.

The fourth book is the one I’m allowed to buy in April. It is a continue on a series I last read back in 2017 and wish to pick up again.

The last one is a book by a Swedish author that I received as a Christmas present from my mother-in-law. I wish to read it so that I can say the next time I meet her that I finally have read it. I received this one several years ago so it is about time. Haha Note: The book is translated to English and it’s title is “Hitman Anders and the Meaning of It All” if you are interested.

What are you planing on reading in the month of April?

Oh what a reading month. Read some really good books this month. Have noticed that my reading mood has been a lot darker than previously months with dark titles like Beartown, Shutter, The Fixer, Vigilante, The Sandman and to some extent also Goodnight Mr Tom. I still feel a little dark so I think my choice of reading material will continue in the month of May. That doesn’t matter for me. I’m a mood reader and if i’m not in a mood for an genre, i wont read it. Its as simple as that. I’m also really happy that I did start and finish the book The Luminaries, which I had as a goal to do before my birthday this year.

How have your reading month been?